Once we create our core workspace as explained in Last artical. Now we will create few core components that will form the bases of any project that operates of data exposed by this project or maintains various operations on this DB. So now we create our spring configuration file countries-app-context.xml as shown below.

Once this structure is created let's at high level decide what we need to create. We have total 3 entities Country, City and Country Language so for these three entities (to make it simple one to one relationship between DB table and a java bean) we need to create three java beans. To access these beans we need to have a repository and to use that repository and perform some business logic we need to have a service class. Last but not the least to test the entire flow we will need our JUnit classes.

So first lets start with creating interfaces, in the next step we will create test cases in Junit based on DB information we have and once that is ready we will create implementation classes. In each service interface we will have 2 methods first method will find a record by primary key and second method will find records by one of column value for table. So following will be the structure. 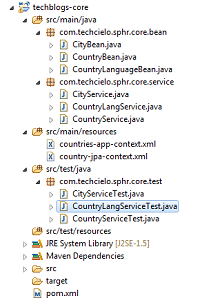 For simplicity we will create flow for only one entity (country) and interested user can do the same for City. CountryLanguage has some special scenario that we will cover in later tutorials. First we will create a bean class for country

Next we create service interface as shown below.

So once we have the test case ready we will do the actual development (not quite common but this is  how TDD or Test Driven Development suppose to work). First we create a repository interface which will extend JpaRepository


Now run your test case and following will be the output.